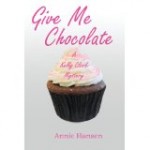 DateMonday, March 24, 2014 at 10:21AM
Give Me Chocolate, A Kelly Clark Mystery. Annie Hansen. Published by Weaving Dreams, May 11, 2013, Trade Paperback and e-book, 261 pages.
Reviewed by Roxe Anne Peacock.
Give Me Chocolate is set in a quaint town along the Fox River in Geneva, Illinois, one hour west of Chicago. Kelly Clark has left California to start anew. She turned her husband, Steve, into the authorities after he tried killing his pregnant mistress. He had already served three years of his thirteen-year sentence when she left penniless to live with her younger sister, Nikki, above the old Victorian which housed the specialty bakery. After several emails from someone in her past and several break-ins within the last month in the historical neighborhood, Kelly wondered if her past didn’t follow her. And when someone she grows found of is found murdered at Chocolate Love, she looks for clues as to who the killer is before she becomes the next victim. As the story progresses, the suspects—as well as bodies—begin to stack up.
When Kelly Clark arrived in Geneva, she had no plans on ever dating again. But Nikki had other ideas, which included yoga in Batavia. Along with the yoga, Nikki hoped Kelly would rekindle a relationship with an old flame. Kelly’s only interests these days were to work on her antique murder series for her editor and continue her jogging in the morning.
Kelly’s older sister, Adelle, and her husband, Mike Stefano, seemed to have it all: three children, large home, and a construction company. Guess who needed a babysitter? But not all was cozy with the Stefano family. They seemed to be having marital problems.
Author Annie Hansen truly weaves the reader through her cozy mystery somewhat in the same sense as Jessica Beck. Lately, it has taken me days to read books, but Ms. Hansen’s descriptive writing kept me turning pages. I finished the book in one sitting. I am looking forward to the next book to see how the author continues the series. There is a bonus recipe at the end of the book for chocolate lovers.
Annie Hansen was a recipient of the Mystery Writers of America 2011 Helen McCloy/MWA Scholarship. After reading Give Me Chocolate, I understand why she won the award. Ms. Hansen is a graduate of the University of Illinois with a B.S. in Biology and lives in the suburbs of Chicago.